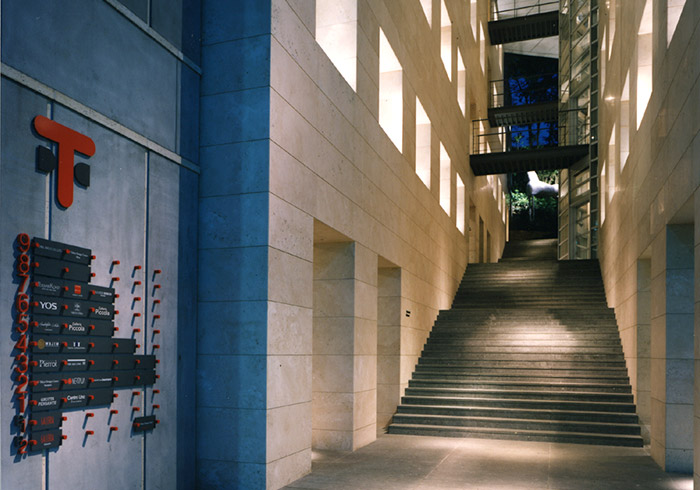 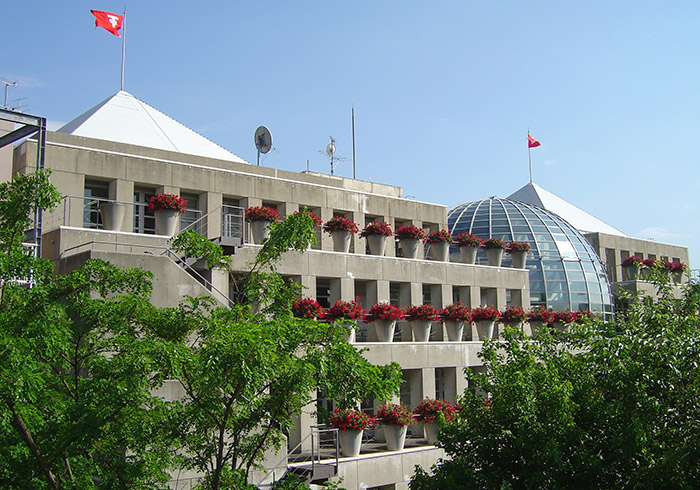 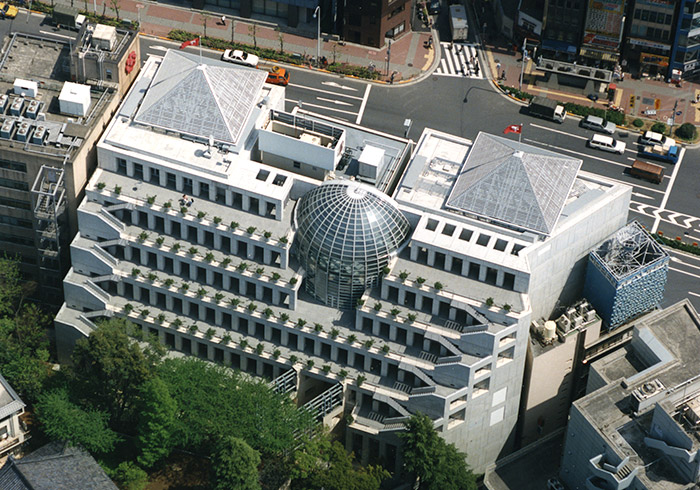 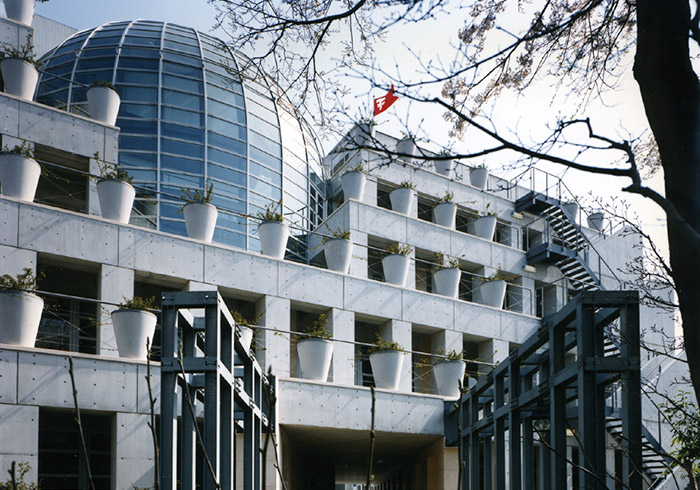 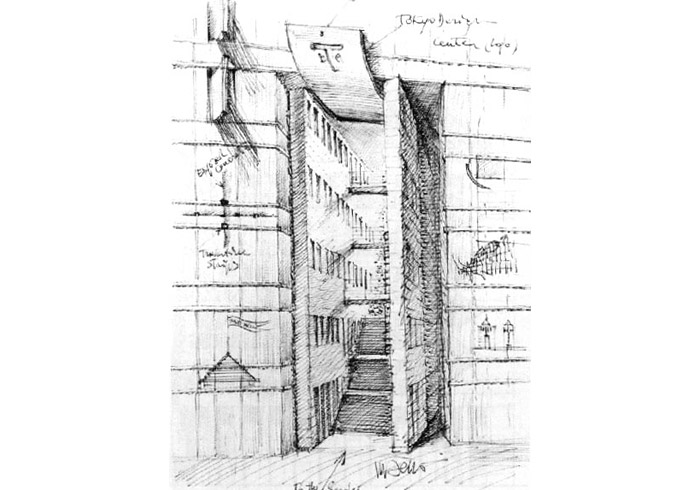 Mario Bellini 1991.12
When I was taken to the spot, I was immediately attracted by the immense difficulties of the task: to design what was to be the Tokyo Design Center on an area that was both important and extremely difficult. Facing a very wide avenue, the Sakurada Dori, and visible every day by millions of people from the nearby platform of Gotanda Station, the site is a remarkably irregular one. It is partially obstructed by an existing commonplace building which interrupts the site’s continuity, whilst on the side behind the street, it is confined, up to third-floor level, by a surprising Japanese garden that climbs steeply.
I quickly felt that the central theme of the architectural composition was to give unity, Identity and depth to the whole building while taking advantage of the unusually divided street front and of the differences in height and landscape. Two wings, almost two towers, squeeze the extraneous building between them until it actually “”disappears”” as a result of their clear and sharply recognizable design.
A public galleria crosses the new building diagonally, thereby also visually connecting the station and the urban level with the Internal raised garden.
The galleria distributes and interconnects all the access points and most significant parts of the Design Center, stressing its role, form and position like a gigantic X-ray. Among these the most Important, due to its function as a continuous vertical pivot, is the cylindrical and glazed elevator hall. This cylinder surfaces and emerges in the shape of a cupola from the solid terraces stepping downwards which, with their rhythmic rows of terracotta vases, respond to the old Japanese garden as an emblematic garden-building in the Italian style. 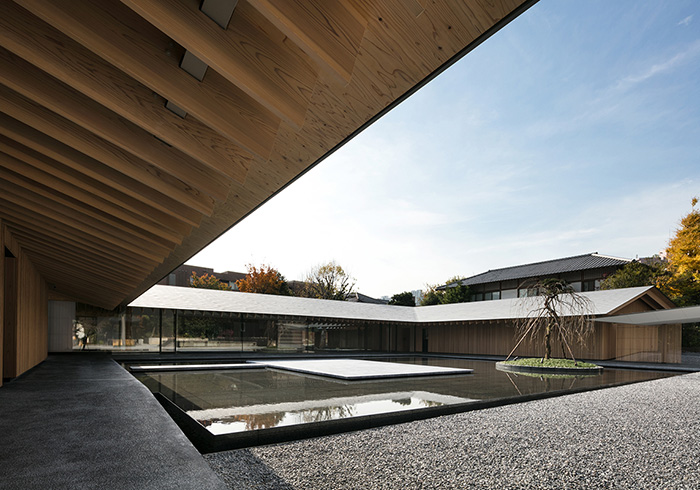 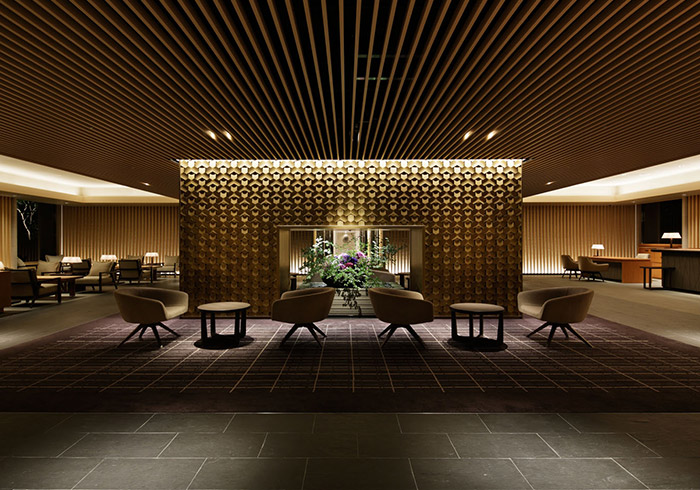 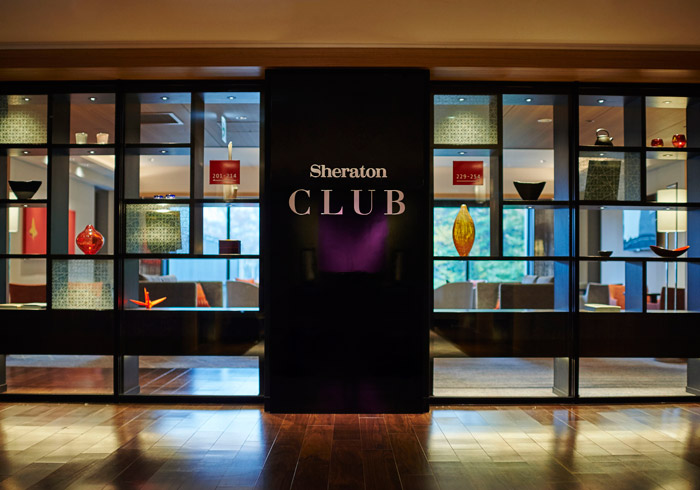 The premises of Miyako Hotel—adjacent to the vast territory of “Happo-en” garden, to which the entrepreneur and politician Fusanosuke Kuhara devoted his heart and soul—is a place where the residence of the well-known economic and political figure Aiichiro Fujiyama was once located. The garden exerts 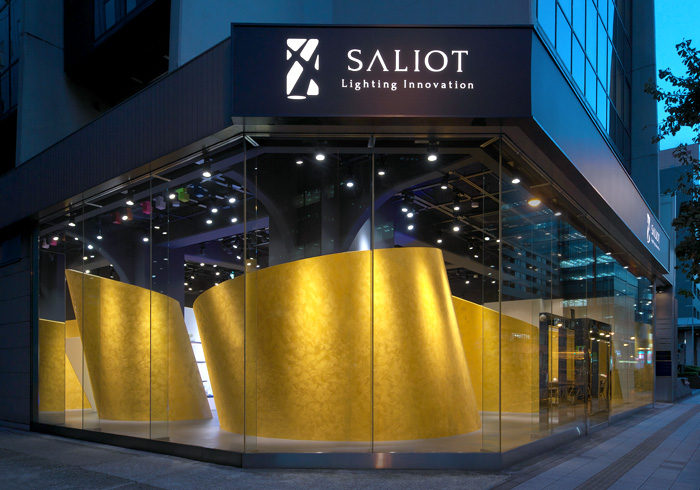 'SALIOT', A New Smart Lighting equiped with IoT. The expectation for the evolution of the revolutionary light is a theme that fascinates many audiences. SALIOT has the possibility to manipulate the color, quality and output of light freely through a device such as a smartphone and to cre